Yangon Golf Club is one of the oldest clubs in Myanmar. The British established this club in 1909 by an unknown designer. However, the club has transited ages till today and is frequently updated to give golfers great experience.

To reach the club, you will take a 25 minutes drive to the North of Yangon town. Yangon Golf Club is run as a not-for-profit organization. Because the club has suffered many problems in the course of time, such as flooding in the monsoon spell and cracking during the dry season, the holes have been moved from one point to another. Currently, the course has been improved and well maintained for golfers to enjoy throughout the year.

Yangon Golf Club is generally challenging but presents players with great fun. It has just several long tee offs that run over wide waters, many bunkers, and hazards that are well placed. The course is one of Myanmar’s premiere ones because it hosts the Asian PGA Tour which is a favorite for locals and international visitors alike.  In the year 2000, the entire greens were covered with grass which was later replaced with japonica to manifested internationally accepted standards. The club staff and caddies are very professional and friendly in their approach in order to give golfers great experience. Yangon Golf Club, then, was an almost exclusively monopolistic pastime place for the European Community until after the end of World War II and Myanmar Independence in 1948. In 1954, the last British Captain of the Club, Mr. I. G. Clarke, the General Manager of William Jack, Hardware Co., gave way to U Cho, Director of Public Instruction, who became the first Burmese Captain. 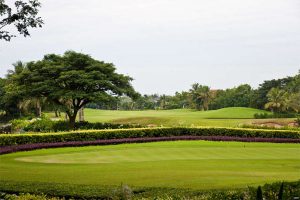